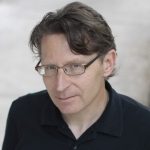 Jeffrey Jerome Cohen is Professor of English and Director of the Medieval and Early Modern Studies Institute (MEMSI) at the George Washington University. He received his BA from the University of Rochester studying English, Classics and Creative Writing (1987) and his PhD from Harvard University (1992). His work explores the interrelated topics of what monsters promise; how the loosely allied schools of thought known as posthumanism might help us to better understand the literatures and cultures of the Middle Ages (and might be transformed by that encounter); the limits and the creativity of our taxonomic impulses; the complexities of time when thought outside of progress narratives; ecologies; hybridity, race, and complicated identities.

Professor Cohen is the author of three books: Of Giants: Sex, Monsters and the Middle Ages; Medieval Identity Machines; and Hybridity, Identity and Monstrosity in Medieval Britain: On Difficult Middles. He blogs at In the Middle.

Profile photograph by Jordan Emont for the GW Hatchet.