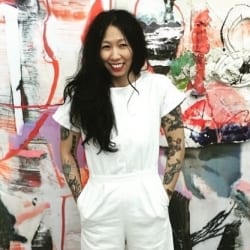 Jennie Jieun Lee is a Brooklyn-based contemporary artist who makes expressive, richly textured ceramics covered in abstract paintings with hints of representational imagery of her immigrant experience. She creates an array of sculptures, including wheel-thrown, hand-altered vessels, masks and slip cast busts with morphing and multipart features that mimic, articulate, and navigate her emotional and psychological spaces.

Lee received the 2015 Artadia Award and was a recipient of the 2016 Pollock Krasner Foundation Grant. She is currently a resident artist and lecturer at California State University of Long Beach and she will have a solo show opening at The Pit in Los Angeles on March 12th of this year. Her work has been shown extensively throughout the world with solo and two person shows at Marlborough Contemporary: Viewing Room, New York, NY (2016), Martos Gallery, New York, NY (2015), 11R, New York, NY (2016), Cooper Cole, Toronto, Canada (2015), Galerie Lefebvre et fils, Paris, France (2014), Levy Delval, Brussels, Belgium (2016), Halsey McKay, East Hampton, NY (2015) along with groups shows at Jonathan Viner, London, UK (2015), Brand New Gallery, Milan, Italy (2016) and many more.

She has been covered in many publications and recently featured in the book, In The Company of Women by Grace Bonney. Jennie has also worked on fabric collaborations with designers such as Rachel Comey where her ceramics were transformed into clothing and accessories for Pre-Fall 2015. In addition, she is a member of The Stanley Love Performance Group.