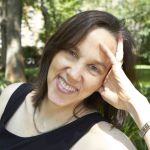 Jennifer Homans is the author of Apollo’s Angels: A History of Ballet (Random House, 2010), which was nominated for a National Book Critics Circle Award and named one of the top ten books of the year by the New York Times Book Review. She is the Dance Critic for The New Republic and has also written for The New York Times, The Guardian (UK), and the New York Review of Books, among other publications. Jennifer holds a B.A. from Columbia University, and a Ph.D. in Modern European History from New York University.  She is presently a Distinguished Scholar in Residence at New York University.

Before becoming a writer, Jennifer was a professional dancer trained at the North Carolina School of the Arts and The School of American Ballet. She performed with the Pacific Northwest Ballet and has danced a wide repertory ranging from works by Marius Petipa to Jerome Robbins, George Balanchine, and other twentieth-century choreographers.

Jennifer is currently at work on a new book, George Balanchine: A History (Random House, forthcoming).