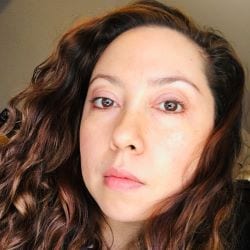 A ลูกครึ่ง (half-child), Jenny Boully was born in Korat, Thailand and grew up on the southwest side of San Antonio, Texas, nestled between Air Force Bases for which her father served. She is the author of Betwixt-and-Between: Essays on the Writing Life, which the Georgia Review calls “a supple and suggestive volume, one dedicated to multiplying literary possibilities even as it names and forcefully critiques the economic and institutional forces that construct and constrain such possibility.” Her first book The Body: An Essay, published when she was 25, is regarded as a canonical text in experimental essays, poetic prose, and imaginative form. Her other books include not merely because of the unknown that was stalking toward them, The Book of Beginnings and Endings: Essays, [one love affair]*, and of the mismatched teacups, of the single-serving spoon: a book of failures. In addition to a Ph.D. in English from the Graduate Center of the City University of New York, she holds an MFA from the University of Notre Dame and an MA in English Writing and Criticism from Hollins University, where she also double-majored in English and Philosophy. She is a disciple of Ajarn Noo Kanpai.