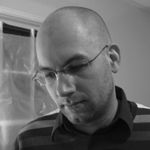 Jered Sprecher is a visual artist who was born in Lincoln, Nebraska (1976). He received his M.F.A. from the University of Iowa and his B.A. from Concordia University in Nebraska. He has taught at Princeton University and Cornell University. Mr. Sprecher currently lives and works in Knoxville, Tennessee, where he is an assistant professor at the University of Tennessee.

Jered Sprecher’s studio practice explores the “handwriting” of humankind. The vocabulary that he draws from is focused on the vast array of marks and images in one’s surroundings. From this vocabulary he samples visual motifs and imports them into his paintings and drawings. These works continually focus on remnants and fragments that are captured in the midst of change, then edited and fused together in the space of painting. These images are pregnant with a longing to communicate. The success and failure of these “messages in a bottle” are the basis of his work.

In 2003, Mr. Sprecher was the recipient of a studio through the Marie Walsh Sharpe Foundation Space Program. He was an artist in residence at the Irish Museum of Modern Art in Dublin, Ireland in 2007.