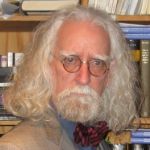 Among other awards, he has won research fellowships from the Alexander von Humboldt Stiftung, the National Endowment for the Humanities, the Radcliffe Institute for Advanced Study, the École des Hautes Études en Sciences Sociales (Paris), and the National Humanities Center. He has held visiting appointments at the Universität Heidelberg (medieval Latin), Columbia University (Germanic Studies), the Universitetas Vilniaus (Yiddish Institute), the Freie Universität Berlin (Jewish Studies). His four authored and eleven translated and/or edited books range over several subdisciplines in European studies, including work on the medieval Latin, German, and Anglo-Saxon reception of Neoplatonism; the sociology of Yiddish studies; gender and class politics in medieval German epic; the construction of the Muslim as Other in medieval Germany; the study of Greek in the medieval West; Old Yiddish literature; and the Ottoman-Turkish language. He is currently working on two long-term projects: a textbook of Old Yiddish language and a monograph tentatively entitled “Cultural Revolution in Ashkenaz: the Emergence of Yiddish Literature.”