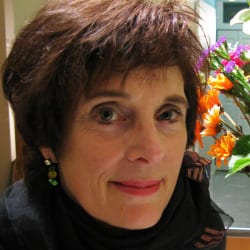 JoAnne Carson is a Brooklyn based artist who is known for her quirky, serio-comic works in painting, sculpture and assemblage. Her work contains an exuberant, over-the-top form sensibility and a surrealist hybridity that happily mixes sources and categories. Her focus during the last few years has been on painting, pictorially expanding on the world that her sculptures inhabited. The paintings portray animated and abstracted flower forms that suggest narrative dramas in which plants take on the role of an ersatz human and offer the viewer a portal into a universe of alternative biology and psychological spectacle.

Carson’s work can be found in many public collections including the Brooklyn Museum of Art, the Museum of Contemporary Art in Chicago, the Fort Worth Art Museum, the Smart Museum of Art in Chicago, the Frederick Weisman Art Foundation in Los Angeles and the Joslyn Art Museum in Omaha. She has received numerous awards including the Rome Prize from the American Academy in Rome, a purchase prize from the American Academy of Arts and Letters, award in sculpture from the National Academy Museum in New York City, the Louise Bourgeois Residency from Yaddo, and individual artist grants from both the National Endowment for the Arts and The Awards in the Visual Arts. Solo museum exhibitions include The Fort Worth Art Museum and The Museum of Contemporary Art in Chicago; additionally she has had multiple one-woman gallery shows in New York and Chicago. Her work has been represented in public group exhibitions most notably in the Whitney Museum Biennial Exhibition, the American Academy of Arts and Letters Ceremonial Exhibition, The New Orleans Museum, the Albright Knox Museum in Buffalo, and the Institute of Contemporary Art in Philadelphia.