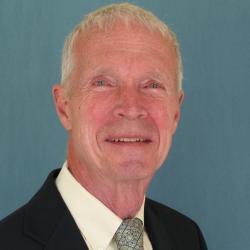 Destined to be a physicist, John J. Hopfield was born in 1933 to two physicist parents who were married in Berlin in 1928 while his father held a Guggenheim Fellowship. After receiving a BA from Swarthmore College (1954) Hopfield studied theoretical condensed matter physics at Cornell University (PhD 1958). He next became a member of the technical staff at ATT Bell Laboratories, an affiliation he kept up for almost 30 years while on the faculty at UC Berkeley (physics, 1961-1964), Princeton University (physics, 1964-1980; molecular biology, 1996-2008), and Caltech (chemistry and biology, 1980-1996). At the time of his Guggenheim Fellowship in 1968-69 he was a leading theoretical physicist, an authority on the interaction of light with solids. He received the 1968 Oliver Buckley Prize of the American Physical Society (jointly with experimental chemist D. G. Thomas).

Upon returning to the US after his Guggenheim Fellowship at the Cavendish Laboratory of Cambridge University, Hopfield completely altered his research field, moving to the intersection between physics and biology. The advances that were being made in quantitative biological experiments made mathematically based theory newly useful in biology. His appointment as Roscoe Dickinson Professor of Chemistry and Biology at Caltech in 1980 attests to the success of this research transition.

By this time his attention had been drawn to neurobiology. What a brain does is in some sense computation, and any real understanding of how a system of interacting neurons functions must be described with mathematical concepts and structure. The first paper Hopfield wrote in this field “Neural networks and physical systems with emergent collective computational abilities” (1982) is the most often cited of his more than 200 scientific papers. Its subject lies at the intersection between theoretical physics, neurobiology, and computer science. He led the establishment of the Caltech interdisciplinary PhD program in Computational and Neural Systems.

Recognitions include honorary degrees from Chicago and Swarthmore, MacArthur Fellow (1983-1988), California Scientist of the Year (1991), The Dirac Medal and Prize (2001), Albert Einstein Award (2005). Swartz Prize, Soc. for Neurosci. (2012). He was President of the American Physical Society (2006), and is a member of the American Philosophical Society, the National Academy of Science, and the American Academy of Arts and Sciences.