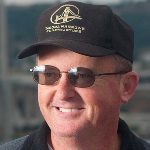 John V. Robinson is a writer and photographer who specializes in labor lore with a focus on bridge construction. Robinson goes onto construction sites and does detailed photo essays of the iron workers, pile drivers, carpenters, laborers, and crane operators who do this demanding and dangerous work. He frequently collects oral histories of the workers.

While a student at U.C. Berkeley Robinson developed in interest in the folklore of working men and women. He studied folklore with Berkeley folklorist Alan Dundes and developed a close friendship with eminent folklorist Archie Green. He worked with Green on several projects for the Fund for Labor Culture & History.

He began his study of bridge builders in 1995 by interviewing the famed bridge builder Alfred Zampa. In 1999 he merged his interests in photography and folklore and began photographing construction workers for an article he was researching on the labor-lore tradition called topping-out. This article was published in Western Folklore in 2001 and has been widely cited by others writing on the topping-out custom. Robinson's writing and photography have been instrumental in bringing more public attention to the mysterious Bay Bridge Troll attached to the Oakland-San Francisco Bay Bridge.

In 2001 Robinson began photographing the construction of Alfred Zampa Memorial Bridge in California and in 2004 published his first book, Spanning the Strait: Building the Alfred Zampa Memorial Bridge. The success of Spanning the Strait brought Robinson's work to the attention of contractors, transportation agencies, and engineering firms, who have commissioned him to do other large construction projects. In 2007 two such long-term projects resulted in the publication of two books: Building the Benicia-Martinez Bridge and Bridging the Tacoma Narrows.

In 2007 he received a grant from the California Council for the Humanities to continue his photography project on the demolition of the 1927 Carquinez Bridge. Currently Robinson teaches at Las Positas College in Livermore CA and Cal State East Bay in Hayward CA.