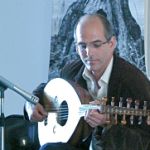 Jonathan H. Shannon is Associate Professor of Anthropology, Hunter College, and a member of the doctoral faculties in Music and Anthropology at the Graduate Center of the City University of New York. He earned his B.A. in English Literature from Stanford University in 1988 and the Ph.D. in Anthropology from the CUNY Graduate Center in 2001. He has taught at the University of Texas, Austin, and, since 2001, Hunter College. His research and writing focus on aesthetics and music performance in the Mediterranean and Arab world, with a special focus on Syria and Morocco. His current research investigates the dynamics of collective memory and the performance of Andalusian musical genres in modern Syria, Morocco, and Spain as part of a larger project on theorizing Mediterranean music and culture. He is the author of numerous articles and the book Among the Jasmine Trees: Music and Modernity in Contemporary Syria (Wesleyan UP, 2006).

In addition, Mr. Shannon is a jazz saxophonist, a devoté of the oud (Arabian lute), and a would-be competitive cyclist.