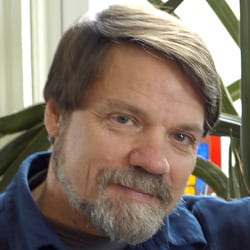 Jonathan Haynes is Professor of English at Long Island University.  He was educated at McGill and Yale and has taught at the American University in Cairo, Tufts, Albion College, and Bennington.  In the first phase of his career he was a literary historian working on the English Renaissance, publishing two books in the field, The Humanist as Traveler: George Sandys’s “Relation of a Journey begun An. Dom. 1610" (Fairleigh Dickinson UP, 1986) and The Social Relations of Jonson’s Theater (Cambridge UP, 1992).

In the early 1990s he abruptly turned into an Africanist, a transformation apparently related to a long-standing interest in cinema and to years of wandering around in what was then called the Third World.  A sabbatical from Bennington in 1991 spent traveling in West Africa was followed by two years in Nigeria as a Fulbright Senior Scholar at the University of Nigeria-Nsukka and Ahmadu Bello University.  In 1996–97 he had another Fulbright in Nigeria, at the University of Ibadan.  In 2001–02 he directed a study-abroad center for Long Island University in Kumasi, Ghana.

He was living in Nigeria when, amidst the catastrophes of military rule and “structural adjustment,” a new kind of filmmaking was born: cheap, quickly-made productions made possible by video technology, produced and marketed through the informal economy, and springing from popular culture.  Nigeria has produced about 14,000 video films since 1992 and is said to have the third-largest film industry in the world.  “Nollywood,” as the English-language branch of the Nigerian film industry is called, has become a global brand, with an audience of hundreds of millions across Africa and the African diaspora.

Haynes wrote the first academic accounts of this phenomenon, a pair of essays published in Research in African Literatures, the second of them co-authored with his friend Onookome Okome.  He edited the first book on the subject, Nigerian Video Films, published first in Nigeria (Nigerian Film Corporation, 1997) and then in an expanded American edition (Ohio UP, 2000).  A stream of essays has followed, appearing in collected volumes and journals, including Africa, African Affairs, Africa Today, Film International, Postcolonial Text, Journal of African Cultural Studies, and Situations.  In 2012 he guest-edited an issue of Journal of African Cinemas and was given a Lifetime Achievement Award by the Nigerian Film Corporation.  He is currently writing a book whose working title is Nollywood: Themes and Genres in Nigerian Film Culture.