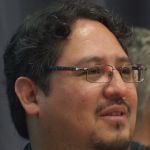 In his interdisciplinary scholarship, clinical-community psychologist Joseph P. Gone examines cultural influences on mental health status. A citizen of the Gros Ventre tribal nation of Montana, he has investigated these issues through collaborative research partnerships in both reservation and urban indigenous communities in the United States and Canada. For example, he attends to the distinctive ethnopsychologies of tribal communities in formulating local concepts of wellness and distress; considers the principles and logics of indigenous therapeutic traditions relative to conventional psychosocial interventions; engages Native traditional epistemologies as alternative ways of knowing and evaluating mental-health outcomes; and imagines how the clinical enterprise would differ if indigenous worldviews and experiences were centered and acknowledged. In each of these endeavors, he is careful to question claims and evaluate evidence with a skeptic’s objections in mind. A graduate of Harvard College and the University of Illinois, Gone has taught in the departments of Psychology (Clinical Area) and American Culture (Native American Studies) at the University of Michigan for over a decade, where he has published more than forty articles and chapters addressed to the cultural psychology of indigenous community mental health. A recipient of several fellowships and two early career awards for emerging leadership in his fields, Gone was most recently honored with the 2013 Stanley Sue Award for Distinguished Contributions to Diversity in Clinical Psychology from Division 12 of the American Psychological Association. During his Guggenheim Fellowship term, he will write a book entitled Rethinking American Indian Mental Health that will harness the considerations and commitments of community psychology in pursuit of alternative possibilities for remedying rampant distress and promoting positive well-being in indigenous settings.