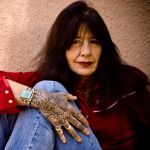 Joy Harjo began writing poetry as a voice for indigenous-rights movements as a university student in Southwest in the seventies.  She came to poetry through her mother’s songwriting, and was later inspired by the lyrical activism of the poets and songwriters Pablo Neruda, Okot b’Pitek, Adrienne Rich, Bob Dylan, Gil Scott-Heron, and Leslie Silko, among others. Her first full book of poetry, She Had Some Horses, has become her signature collection.  She has published seven books of poetry, including her most recent How We Became Human—New and Selected Poems.  Her awards for poetry include the New Mexico Governor’s Award for Excellence in the Arts, a Rasmussen U.S. Artists Fellowship, and the William Carlos Williams Award from the Poetry Society of America. Harjo has performed in universities and venues in all corners of the world and has appeared in many shows, among them Bill Moyer’s poetry series and HBO’s Def Poetry Jam. She also writes music, plays saxophone, and performs with her bands nationally and internationally. She has released four albums of original music including her most recent, Red Dreams, A Trail Beyond Tears, and has won a NAMMY for Best Female Artist. She has been commissioned by The Public Theater of New York City to write the musical We Were There When Jazz Was Invented, a story to restore indigenous peoples to the origin story of jazz and blues. Soul Talk, Song Language, Conversations with Joy Harjo from Wesleyan, and Crazy Brave, a memoir from W.W. Norton, are her most recent literary releases.  Crazy Brave won the PEN USA Literary Award for best creative nonfiction. She is a founding board member of Native Arts and Cultures Foundation and was a member of the National Council on the Arts. She is establishing music and literary workshops for tribal community members in the Mvskoke Nation of Oklahoma where she lives. She is a half-time full professor at the University of Illinois, Urbana-Champaign. Profile photograph by Karen Kuehn