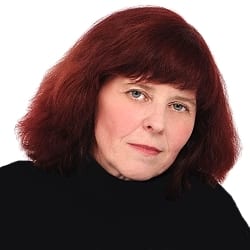 American art song composer Juliana Hall (b. 1958) is a prolific and highly-regarded composer of vocal music, having written more than 50 song cycles and works of vocal chamber music. Her songs have been called “brilliant” (Washington Post), “beguiling” (Times of London), and “the most genuinely moving music of the afternoon” (Boston Globe).

The NATS Journal of Singing wrote that “Hall’s text setting is spot on and exquisite…as in all of Juliana Hall’s wonderful creations, the composer has sensitively allowed the text to dictate the tonal palette and direction…[they are] artful and adroit expressions of superb poetic and musical choices.”, and Voix des Arts noted that Hall’s songs are “wholly organic, never contrived, and the composer perpetuates the American Art Song tradition of Beach, Barber, and Bolcom with music of ingenuity and integrity.”

Upcoming projects include a collaboration with opera star Stephanie Blythe, on a new contralto song cycle based on 7 love poems by James Joyce called “Of That So Sweet Imprisonment”. Blythe has also invited Hall to be the Guest Composer at the next Fall Island Vocal Arts Seminar, at SUNY Potsdam, in May 2018.

Most recently Hall was chosen to receive the 2017 Sorel Commission from SongFest, America’s premier month-long art song training program, for her song cycle “When the South Wind Sings” (7 songs on poems by Carl Sandburg), with a premiere by soprano Tabitha Burchett and pianist Riley McKinch. She also composed “Christina’s World” (5 songs on poems by Christina Rossetti) for soprano Gwen Coleman Detwiler, who with pianist Marie-France Lefebvre, premiered the cycle on the Cincinnati Song Initiative Series this Spring. Hall is presently collaborating with Grammy-winning soprano, Molly Fillmore, on “Cameos” – a new cycle of 6 songs on poems of Fillmore’s creation about “unknown” women artists.

Prior to these projects, Hall collaborated with opera star countertenor Brian Asawa, in the composition of her largest song cycle “O Mistress Mine” (12 songs on texts from plays by William Shakespeare). Following Asawa’s untimely death just months before its scheduled premiere, “O Mistress Mine” was premiered in 2016 by countertenor Darryl Taylor, with Hall at the piano.

Taylor and Hall also recorded “O Mistress Mine” on her 2017 CD release “Love’s Signature” on the MSR Classics label. The CD also includes two other song cycles – “Propriety” and “Syllables of Velvet, Sentences of Plush” – recorded by Grammy-winning soprano Susan Narucki with pianist Donald Berman. The recording has received wide critical acclaim; Gramophone Magazine wrote that “[Hall’s] sensitivity to words is on impressive display on ‘Love’s Signature’…these songs show Hall to be a composer who savours lyrical lines and harmonies peppered with gentle spices.”

Juliana Hall’s songs have not only been embraced by some of the world’s leading singers and collaborative pianists, but also by voice teachers at many universities and conservatories, as well as their students. “Naturally, it’s exciting when a great, world-class singer performs my songs, but there are also so many really wonderful singers at our music schools, both faculty and students. I particularly love when a student sings my songs,” says Hall. “To be a part of a young person’s life, to add another dimension to their understanding of their craft, to be a part of their artistic and personal development, is a deep honor for me.”

Hall’s own musical education has an unusual history. Despite having begun formal study of composition at the relatively late age of 26 while she was in graduate school at the Yale School of Music, as a piano performance major, her composition teachers there – Martin Bresnick, Leon Kirchner, and Frederic Rzewski – all encouraged her to shift her focus from piano to composition, and in 1987 she was awarded a Master’s degree in Music Composition from Yale.

After Yale, Hall moved to Minneapolis to study with composer Dominick Argento, and in the Spring of 1987 she received her first commission, from the Schubert Club of Saint Paul, MN, for “Night Dances”, a song cycle for soprano Dawn Upshaw. A second Schubert Club commission came a few years later for “Winter Windows”, a song cycle for baritone David Malis. In 1989 she received a Guggenheim Fellowship in Music Composition, and since that time her songs have been performed in 29 countries on six continents, and in more than 30 states across America.