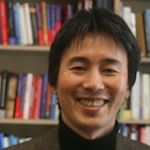 Jun Korenaga is Professor of Geology and Geophysics at Yale University. He studies the evolution of the Earth using an array of theoretical and observational methods. Korenaga is known particularly for his hypothesis of slower plate tectonics on the young Earth, which challenges a prevailing belief in earth sciences. He proposed the hypothesis in 2003 as a solution for long-standing conflicts between geophysics and geochemistry, and supporting evidence has been emerging in recent years, including the petrological reconstruction of Earth's cooling history, the atmospheric abundance of radiogenic xenon isotopes, and paleomagnetic constraints on continental motion. As a self-described "freestyle" geophysicist, he traverses multiple disciplines at will and works on the pressure points of the Earth system. He uses computational fluid dynamics to construct the scaling of mantle convection, whereas he formulates inverse problems to bring statistical rigor to global geochemistry. He is also keen on quantifying laboratory constraints on rock mechanics using Markov chain Monte Carlo, and he sometimes goes out to sea to probe the origin of massive submarine volcanism. Korenaga has recently developed a new method of identifying faint signals in noisy data by combining bootstrap resampling with multichannel signal processing. Compared with existing methods, the new approach is more effective by up to two orders of magnitude, and it could allow us to see what has long been invisible. Such a detection capability is essential to resolve the fine-scale structure of Earth's mantle and constrain the efficiency of convective mixing. As a Guggenheim Fellow he will explore the possibility of optimizing the new detection method and its application to the seismic imaging of Earth's deep interior.