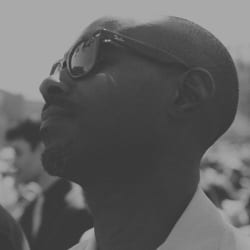 Kahlil Joseph is an American artist and filmmaker working in Los Angeles. He is enormously grateful to receive a Guggenheim Fellowship for his unique approach to developing his art and his films.

In a cover profile of Joseph and his work, Art Papers writes:
“For years, the name Kahlil Joseph seems to have traveled via word of mouth: The New Yorker critic Hilton Als heard about him from writer Sharifa Pitts; Kara Walker found his work through artist Deana Lawson. The opening of Double Conscience (2015), however, inducts Joseph into the institutional framework that is contemporary art…Kahlil Joseph is best described as a filmmaker. What complicates that identity is that he's a filmmaker who's poised to profoundly disturb the boundaries between art forms, and disorder the depiction of race on film. His works erode lingering distinctions between music video, art-house film, and new media art. A common experience in front of one of his films seems to be that viewers don't care what they think they are watching—they just want to see it again.”

His previous work includes Until the Quiet Comes, which received widespread critical acclaim and won the Grand Jury Prize for Short Films at the 2013 Sundance Film Festival and Video of the Year at the UKMVA’s in 2013. The following year, the film was included in Kara Walker’s celebrated exhibit, Ruffneck Constructivists, at the Institute of Contemporary Art in Philadelphia. His first solo major museum show, Double Conscience, comprising the double-channel video m.A.A.d. at the Museum of Contemporary Art, ranked #1 in the “Top 10 Los Angeles Art Shows of 2015” by leading art/culture site HyperAllergic. Young Blood: Noah Davis, Kahlil Joseph and The Underground Museum, a show of new film works by Joseph and paintings by his late brother Noah Davis (and founder of the Underground Museum), opens at the Frye Art Museum in Seattle spring 2016.

Currently, Joseph is a founding member of the independent production company What Matters Most, and also serves as vice president of the board at The Underground Museum, a vanguard and pioneering independent art museum, exhibition space and community hub in Los Angeles.