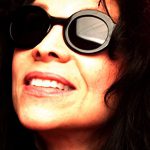 Kasumi is internationally celebrated as a leading innovator of a new art form synthesizing film, sound, video, and emerging technologies. She has won global acclaim for her experimental films and video art in venues worldwide, from her Lincoln Center appearance with Pinchas Zukerman and The New York Philharmonic to live performances with Grandmaster Flash and DJ Spooky, and has performed and exhibited work at Württembergischen Kunstverein Stuttgart and at the Chroma Festival de Arte Audiovisual in Guadalajara, Mexico.

Her film Breakdown, which premiered at Carnegie Hall with the American Composers Orchestra, won Vimeo’s Best Remix award 2010. She was awarded an EMPAC Dance Movies Commission and has created video art for performance with The Cleveland Orchestra. Her film The Free Speech Zone, cited in The Encyclopedia of Underground Movies, was featured at the Forum des Images in Paris, the Milano Film Festival, Expresión en Corto, Mexico City, and the Sapporo International Short Film Festival where it won First Prize.