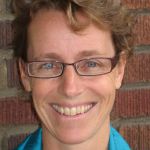 Kate Brown is the author of A Biography of No Place: From Ethnic Borderland to Soviet Heartland (Harvard UP, 2004), which won several prizes including the American Historical Association’s George Louis Beer Prize for the Best Book in International European History. Her work as an historian of landscape has mostly focused on territories and populations laid waste in the wake of modernist progress. She has written about the Chernobyl Zone of Alienation, gulag cities in Kazakhstan, depopulated railroad towns, and the urban rustbelt of the American West and Midwest. Most recently she is writing a tandem history of the cities and territories surrounding the world’s first two plutonium plants—in Hanford, Washington, and Maiak, Russia. She has published in the American Historical Review, Chronicle of Higher Education, Harper’s on-line edition, Kritika, and contributes to the Times Literary Supplement. Kate Brown is an Associate Professor of History at the University of Maryland, Baltimore County (UMBC).