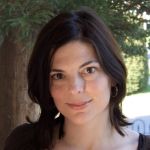 Kate Fodor’s plays include Fifty Ways, RX, 100 Saints You Should Know, and Hannah and Martin. Her work has been produced around the country and abroad, including at Playwrights Horizons, Primary Stages, Steppenwolf Garage, Epic Theatre Ensemble, San Jose Repertory Theater, and TimeLine Theatre. RX was a New York Times Critics’ Pick when it was produced Off-Broadway, while 100 Saints You Should Know was named one of the best plays of the year by Time Out New York, Entertainment Weekly, and Theater Yearbook. 100 Saints appears in Smith & Kraus' anthology New Playwrights: The Best Plays of 2008, while Hannah and Martin is included in The Susan Smith Blackburn Prize: Six Important New Plays by Women from the 25th Anniversary Year. Kate is a recipient of the Kennedy Center's Roger L. Stevens Award, the National Theater Conference's Barrie Stavis Award, a Joseph Jefferson Citation, and an After Dark Award. She is a resident playwright at New Dramatists in New York and was the 2011–2012 McKnight Fellow at the Playwrights Center in Minneapolis.