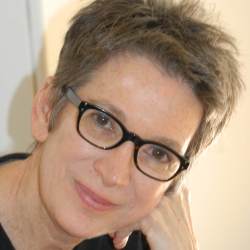 Trained in languages and linguistics, Kay Rosen realized early in her academic career that what interested her most about language had to be expressed visually, so in the 1970’s she started over as an artist, exploring the intersection of meaning and structure in language through pictorial means: color, materials, scale, composition, typography, and graphic design. She loves the physical act of painting and drawing, but doesn’t disagree with those who describe her work as sculptural, because she perceives letters as objects and bodies; architectural, because of her texts’ strong connections to the space of a wall, canvas, or page; poetic, because of her intuitive approach to language; and athletic, because of language’s performative potential.

Rosen’s paintings, drawings, editions, collages, installations, and videos have been presented in solo and group exhibitions and public projects in museums, institutions, and galleries nationally and internationally for forty years, among them The Art Institute of Chicago, the Museum of Modern Art (NY), Los Angeles Museum of Contemporary Art which, along with Otis College of Art and Design, hosted her mid-career survey “Kay Rosen: Lifeli[k]e,” Art Gallery of New South Wales (Sydney), the Whitney Museum of American Art, MIT List Visual Arts Center, and the Contemporary Arts Museum Houston. Her work resides in public and private collections worldwide. She has been the recipient of three National Endowment for the Arts fellowships, Anonymous Was a Woman Award, SJ Weiler Fund Award, and the Artist Award for a Distinguished Body of Work from the College Art Association.

Rosen grew up in Corpus Christi, Texas and lives in Gary, Indiana, with some time spent in New York City. She was on the faculty at The School of the Art Institute of Chicago for twenty-four years.