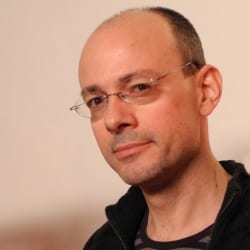 Kevin M. F. Platt is Professor of Slavic Languages and Literatures and Graduate Chair of the Comparative Literature Program at the University of Pennsylvania. He is also a member of Penn’s graduate teaching faculty in History and in English Literature. His research focuses on representations of Russian history, Russian historiography, and history and memory in Russia. Additionally, he frequently writes about and translates classic and contemporary Russian poets. Platt received his B.A. summa cum laude from Amherst College (1989) and his Ph.D. from Stanford University (1994). He is the author of Terror and Greatness: Ivan and Peter as Russian Myths (Cornell UP, 2011) and History in a Grotesque Key: Russian Literature and the Idea of Revolution (Stanford UP, 1997; Russian edition 2006), and the co-editor (with David Brandenberger) of Epic Revisionism: Russian History and Literature as Stalinist Propaganda (Wisconsin UP, 2006). His essays have appeared in a wide range of journals in English and in Russian. He also edited and contributed translations to Modernist Archaist: Selected Poems by Osip Mandelstam (Whale and Star Press, 2008) and edited Intimations: Selected Poetry by Anna Akhmatova, translated by James Falen (Whale and Star Press, 2010). His main current scholarly undertaking is a critical historiography of Russia, tentatively entitled The Making of Russian History from Peter the Great to Putin. He is also working on a study of contemporary Russian culture in Latvia and a number of translation projects.