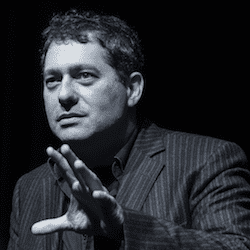 L.M. Bogad is a performance artist and scholar specializing in humor, imagination, and theatrics in progressive movement activism. Professor of political performance at U.C. Davis, he has authored the books Tactical Performance: The Theory and Practice of Serious Play, Electoral Guerrilla Theatre: Radical Ridicule and Social Movements, and Performing Truth: Works of Radical Memory for Times of Social Amnesia, and the plays ECONOMUSIC, HAYMARKET, SANTIAGO 9/11/1973, COINTELSHOW, and TAHRIR. He is creator/host of the podcast, THE PLAGUE. Bogad’s Delivering Democracy, a troupe of dancing mailboxes and ballot boxes, entertained and informed voters in 2020, joyfully resisting authoritarian disinformation and voter repression.

Bogad has innovated playful interventions, street theatre, and mediagenic pranks with social movement organizations for 25 years, and has performed and led workshops internationally from Chile to Finland, from New Zealand to Egypt, on picket lines, in squatted buildings, and in major museums and theatres. He is a Cabinet Member and WPA Artist with the U.S. Department of Arts and Culture, an alumnus of the Lincoln Center Theatre Directors Lab, and cofounder of the Clandestine Insurgent Rebel Clown Army.