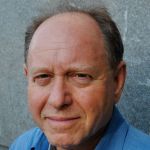 L. S. Asekoff has published four books of poetry: Dreams of a Work (1994) and North Star (1997) with Orchises Press, and The Gate of Horn (2010) and  the verse-novella Freedom Hill (2011) with TriQuarterly/Northwestern University Press. His poems have appeared in such magazines as The New Yorker, American Poetry Review, and Ninth Letter.  He has received awards from the New York Foundation for the Arts, the National Foundation for the Arts, the Fund for Poetry, and in 2012 was chosen by poet laureate Phil Levine for a Library of Congress Witter Bynner Fellowship.

Born in 1939 in Boston, Massachusetts, Asekoff grew up on the grounds of two mental hospitals, Danvers State and Metropolitan State, where his father was a resident psychiatrist. He attended Bowdoin College, Trinity College (Dublin), and Brandeis University and taught for forty-two years at Brooklyn College where he was coordinator of the MFA Poetry Program and faculty associate of The Wolfe Institute for the Humanities. He lives in Clermont, New York with his wife, the printmaker, Mary Louise Kalin.

He is currently working on Clermont, a book of poems and prose poems culled from his journals, and a book-length poem, The Vanishing Hand.