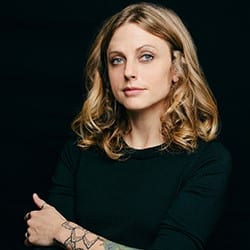 Lacy M. Johnson is a Houston-based professor, curator, activist, and is author of the essay collection The Reckonings (Scribner, 2018), the memoir The Other Side (Tin House, 2014)— both National Book Critics Circle Award finalists — and the memoir Trespasses (U Iowa Press, 2012). Her writing has appeared in the Best American Essays, Best American Travel Writing, The New Yorker, The New York Times, The Los Angeles Times, Paris Review, Virginia Quarterly Review, Tin House, Guernica, and elsewhere. Her current project, a book-length essay, examines how prevailing ideas about “nature” contain within them implicit permission to commit violence against the environment and one another. Born in Iowa and raised in rural Missouri, Johnson worked as a cashier at Wal-Mart, sold steaks door-to-door, and puppeteered with a traveling children's museum before earning a PhD in Literature and Creative Writing from University of Houston. She currently teaches creative nonfiction at Rice University and is the Founding Director of The Houston Flood Museum. Photo Credit: John Carrithers