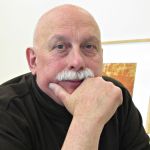 When I returned to Brooklyn in 1970 after two years as a VISTA volunteer, I had no plans and a $30 camera I barely knew how to use. I took a course at the School of Visual Arts and a job with the telephone company, and I began to photograph my family and friends. I rented a storefront and set up a darkroom where I made small black and white prints.

Photography soon became the center of my life. I wandered the working-class Italian-American neighborhoods I knew—South Brooklyn and Sunset Park. Without goals or plans, I photographed whatever interested me. My subjects ranged from kids playing football in the street to old men sitting in bars, from religious rituals to apartment interiors.

Eventually I returned to college, completed a Master's degree, and, while working a series of odd jobs, began exhibiting my work. In 1978 I was selected as a photographer in the New York Cultural Foundation’s CETA Artists Project. In 1980, as this program ended, Scribner’s published HALLOWEEN, a book of my photographs.

Despite some moderate success I became frustrated with the ‘art world’ and by 1981 I was photographing infrequently and working primarily as a carpenter. This continued until 1989 when I started my present job as Staff Photographer for New York City’s Department of Housing Preservation and Development. I was hired to document living conditions and housing renovation and construction. As I traveled throughout the city, my love of photography returned. I began photographing several new projects with a panoramic camera. I learned how to make large color prints and in 1994 began exhibiting again. My Guggenheim Fellowship supported a series of large urban landscapes. Using an 8x10-inch view camera I have expanded this body of work to include interiors of abandoned buildings, especially movie theaters and churches.

Some of Mr. Racioppo's images from Brooklyn Interiors and O Giglio e Paradiso and more information about him are available at the Safe-T-Gallery website.

Follow this link to read a review of Larry Racioppo: A Photographer in the City, currently on display at Art + Cayce, in Cayce, South Carolina.