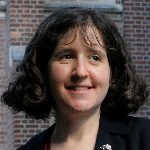 Laura Landweber is a Professor of Biology in the Department of Ecology & Evolutionary Biology at Princeton University. She received her A.B. summa cum laude from Princeton in 1989 and her Ph.D. from Harvard University in 1993 working with Walter Gilbert and Richard Lewontin.  Before returning to Princeton as an assistant professor in 1994, she was a Junior Fellow of the Harvard Society of Fellows, where she worked with Jack Szostak.  She has authored over 110 publications in molecular and evolutionary biology and edited three books, in areas ranging from genetics and evolution to DNA-based computers.  She has served on various panels, working groups, and advisory committees for the NSF, NIH, and NASA and co-chaired the NHGRI Comparative Genome Evolution Working Group from 2003 to 2007.  She is currently Co-Editor-in-Chief of Biology Direct, a new journal experimenting with open, signed peer review.  She is also an associate editor of the Journal of Molecular Evolution, Genome Biology and Evolution, a member of Faculty of 1000, and served as Councilor for the Society for Molecular Biology and Evolution from 2007 to 2009.  A recipient of Burroughs-Wellcome Fund (1994) and Sigma Xi (1999) new investigator awards and a Blavatnik award for young scientists (2008), she was elected a 2005 Fellow of AAAS for probing the diversity of genetic systems in microbial eukaryotes, including scrambled genes, RNA editing, variant genetic codes, and comparative genomics.  Her work investigates the origin of novel genetic systems. Recent discoveries include the ability of RNA molecules to transmit heritable information across generations, bypassing the information encoded in DNA.