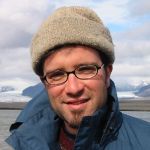 Dr. Laurence C. Smith is Professor and Vice-Chair of Geography and Professor of Earth & Space Sciences at UCLA. He earned a B.S. in Geological Sciences from the University of Illinois (1989), M.S. in geological sciences from Indiana University (1991), and Ph.D. in Earth and atmospheric sciences from Cornell University (1996). He has published more than sixty research papers including in the journals Science and Nature. In 2006, he briefed Congress on the likely impacts of northern climate change, and in 2007 his work appeared prominently in the Fourth Assessment Report of the United Nations' Intergovernmental Panel on Climate Change (IPCC).  He has won more than $5M in external grant funding from the National Science Foundation and the National Aeronautics and Space Administration (NASA) for his research on northern climate change.