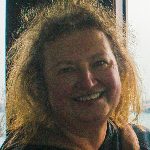 Lea VanderVelde is best known for drawing contemporary insights on work law and constitutional liberties from her historical study of the Thirteenth Amendment, free labor, and slavery. She examines legal rules and practices of free labor and slavery, as an oppressive labor and caste system. Her focus is upon how these legal rules are reactive to multiple categories of subordination, gender, race, class, and migration status. She draws her inspiration from social history, legal realism, and anthropological cross-cultural observation.

She is the Josephine R. Witte Professor of Law at the University of Iowa College of Law where she teaches work law, constitutional law, property law, and legal history.

With the Guggenheim fellowship in Constitutional Studies, she is pursuing the possibilities that digital technology offers for researching thousands of documents and accounts about the antebellum frontier. This new technology has allowed her to push the boundaries of what was previously impossible in legal and constitutional history. Professor VanderVelde’s current project is ambitious. She hopes to create several detailed maps of the expansion of U.S. sovereignty in the period between 1796 and 1857. For this project, The Law of the Antebellum Frontier, she is a principal investigator at the Spatial History Lab at Stanford University. She is using GIS mapping, as well as social-network mapping and textual-analysis techniques.

This project will provide the research basis for examining the larger questions about the expansion of the American empire before the Civil War, and the role of indigenous and subordinated peoples, and governmental and commercial institutions in that territorial expansion.

After playing a role in the discovery of roughly 300 freedom lawsuits brought by slaves in St. Louis, VanderVelde began writing Redemption Songs: Freedom Suits in Frontier Courtrooms. Redemption Songs is under contract to Oxford University Press, scheduled for release in 2013.

Her recent book, Mrs. Dred Scott: A Life on Slavery’s Frontier (Oxford University Press, 2009), chronicles the life of the previously unknown Harriet Scott, the slave woman who played a pivotal role in American constitutional history by her central place in the Dred Scott v. Sandford decision of the U.S. Supreme Court. Harriet Scott’s significance in this famous case was first explored in VanderVelde’s 1996 article in the Yale Law Journal (with co-author Subramanian). The book is unique in being a full-length biography of an illiterate slave woman. Many historians thought that such a biography of an illiterate person was an impossible task. This biography constructs a slave woman’s life from the meticulous examination of the context in which she lived: the 1830s Minnesota-Wisconsin frontier wilderness and slavery-era St. Louis.

Among Lea VanderVelde’s articles on the legal history of work are "The Legal Ways of Seduction," 48 Stanford L. Review 817, "The Gendered Origins of the Lumley Doctrine," 101 Yale L. J. 775; "The Labor Vision of the Thirteenth Amendment," 138 U.Pa. L. Rev. 437; "A Singular Conscience: In Re Summers," 14 Ee Rights & Employment Policy Journal. Her works on contemporary legal jurisprudence include "Walmart as a Phenomenon in the Legal World: Matters of Scale, Scale Matters in Walmart World, "The Thirteenth Amendment of Our Aspirations," 38 Toledo L. Rev. 855, and "Substituting Social Inclusion for Equal Treatment : A Response to Professor Hugh Collins," 14 Transnation’l Law and Contemp. Problems 919.