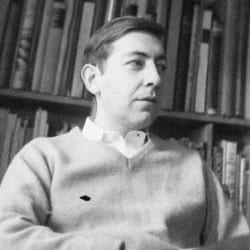 Leonard Baskin, eminent printmaker, book illustrator, and sculptor, was awarded a Guggenheim Fellowship to explore working with large-scale woodcuts.  Born the son of a rabbi in New Jersey in 1922, he possessed an early interest in sculpture.  Mr. Baskin studied at NYU’s School of Architecture and Applied Arts from 1939 to 1941, and on scholarship at the Yale School of Fine Arts from 1941 to 1943.  While at Yale, Mr. Baskin founded the Gehenna Press, known for its inventive use of engravings, typography, and the production of fine limited-edition illustrated books.  Following service in the Navy during WWII and study in Europe after the war, he served as a professor of sculpture and printmaking at Smith College from 1953 to 1974, and then taught at Hampshire College from 1984 to 1994.  His work was exhibited at New York and Boston galleries on a regular basis, and in exhibitions at the Museum of Modern Art, the Smithsonian, and the 1969 Venice Biennale.

As a graphic artist, Leonard Baskin made major contributions to the reinvention of woodcuts, illustrated books, and other printed works on paper.  Gehenna Press, which produced over 100 limited-edition volumes during a span of more than 50 years, set a new measure of success for private presses.  Mr. Baskin’s graphic work ranges from illustrations for award-winning children’s books to published works of poetry by William Blake, Euripedes, and Ted Hughes.  He is also considered one of the most exceptional sculptors of the century, and worked large-scale with bronze, limestone, and wood, creating figures imbued with a stark sense of mortality.  He was commissioned to produce large public sculptures for the Franklin Delano Roosevelt Memorial and the Woodrow Wilson Memorial in Washington, D.C., and for the Holocaust Memorial in Ann Arbor, Michigan.  In addition to numerous retrospectives, his work is held in many public and private collections, including the Museum of Modern Art and the Metropolitan Museum of Art in New York, the Art Institute of Chicago, and the British Museum in London.   In addition to the Guggenheim Fellowship, Mr. Baskin was honored with the Jewish Cultural Achievement Award from the National Foundation for Jewish Culture and the Gold Medal of the National Academy of Arts and Letters, among others.  In June 2000, Mr. Baskin died at his home in Northampton, Massachusetts.

For more information about Leonard Baskin, see the following links: