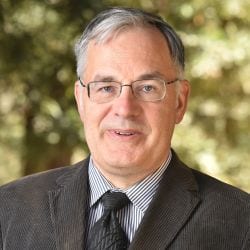 Lothar von Falkenhausen is Professor of Chinese Archaeology and Art History at UCLA and heads the East Asian Laboratory at UCLA’s Cotsen Institute of Archaeology . Born in Essen (Germany), he was educated at Bonn University, Peking University, Kyōto University, and Harvard University, and he received his PhD in anthropology from Harvard in 1988. Before coming to UCLA in 1993, he taught at Stanford University (1988-1990) and the University of California, Riverside (1991-1993). In 2018 he was appointed to a part-time visiting chair as Changjiang Professor at Xibei University in Xi’an (China), where he hopes to foster an increased awareness in the field of Chinese archaeology of international perspectives and practices.

An active field archaeologist, Falkenhausen was co-Principal Investigator of an international archaeological project on ancient salt production in the Yangzi River basin (1999-2004) and is serving as Instructor of Record of the International Archaeological Field School at Yangguanzhai, Xi’an (2010-). He has held fellowships from, among others, the Alexander von Humboldt Foundation, the Japanese Ministry of Science and Education, the Norwegian Academy of Sciences, and the Getty Foundation, and he has taught as a visiting professor in Germany, France, Hong Kong, Japan, and China. He is a full member of the German Archaeological Institute; a honorary research fellow of the Shaanxi Archaeological Academy; a honorary professor of Zhejiang University; and a fellow of the American Academy of Arts and Sciences and of the American Philosophical Society. In 2012, President Obama appointed him to the Cultural Property Advisory Committee, Department of State, which advises the president on preventing the illicit trade in antiquities.

Falkenhausen’s main research interest is in the archaeology of the Chinese Bronze Age, focusing on large interdisciplinary and historical issues on which archaeological materials can provide significant new information. He has published copiously on musical instruments, including a book, Suspended Music: Chime Bells in the Culture of Bronze Age China (California, 1993); Chinese bronzes and their inscriptions; Chinese ritual; regional cultures; trans-Asiatic contacts; the history of archaeology in East Asia; and method and theory in East Asian archaeology. His Chinese Society in the Age of Confucius (1000-250 BC): The Archaeological Evidence (Cotsen Institute Press, 2006) received the Society for American Archaeology Book Award.

As a Guggenheim Fellow, Falkenhausen plans to finish a monograph on the economy of continental East Asia during the eight centuries or so preceding the unification of China by the First Emperor of Qin in 221 BCE. This period saw the tradition from a regimented, élite-centered gift-giving economy (or prestige-good economy) to a market economy that was at least partly monetized. How can this transition been traced through changes in agriculture, resource extraction (mining), craft production, and trade? And how does it relate to wider sociopolitical and intellectual trends? A pendant to his earlier Chinese Society, the book will probe the archaeological record for new information that is not available from textual sources and that, Falkenhausen hopes, will be able to illustrate economic developments in a uniquely concrete and detailed way.