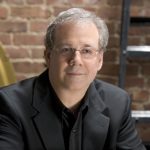 Described by The New Yorker as a composer of “fearless eloquence,” Louis Karchin has been honored with performances of his music throughout the United States, Europe, and the Far East. His oeuvre is comprised of over sixty works for orchestra, chamber ensembles, soloists, numerous songs or song cycles for voice and piano or voice and instrumental combinations, and an opera. In the summer of 2011, Mr. Karchin’s Chamber Symphony will be performed at Tanglewood’s Festival of Contemporary Music in Seiji Ozawa Hall, with the composer conducting. His opera, Romulus, will be released this summer on Naxos Records. During the 2010-11 concert season, Mr. Karchin’s duo, Evocations, written for clarinetist Jean Kopperud and percussionist Tom Kolor, was performed on tour by them in seven cities throughout the United States and will be recorded in June for future CD release. Mr. Karchin is currently at work on a commission from the Network for New Music of Philadelphia as well as a second opera, based on Charlotte Brontë’s novel Jane Eyre, with a libretto by Diane Osen.

Mr. Karchin’s work has been recognized by awards from the American Academy of Arts and Letters, the National Endowment for the Arts, the Fromm Music Foundation at Harvard University, the Serge Koussevitzky Music Foundation of the Library of Congress, and the Barlow Endowment of Brigham Young University. His music is recorded on New World, Albany, and CRI labels, and is published by C. F. Peters Corporation and the American Composers Alliance. A frequent conductor of new music, Mr. Karchin will lead the Orchestra of the League of Composers this June at Miller Theatre, Columbia University, in a program of five new works by Missy Mazzoli and fellow Guggenheim Fellows Elliott Carter, Arthur Kreiger, David Rakowski, and Shulamit Ran. He is Professor of Music at New York University.