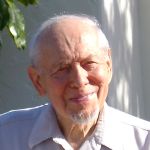 Born in Palestine in 1913 of American parents, Mael Melvin studied theoretical physics at the University of Chicago, where he received a B.S. (1933), M.S. (1935), and Ph.D. (1938). He worked as an apprentice metallurgist at the Carnegie Steel Corporation from 1936 to 1938, before beginning his professional academic career at Columbia University as an Instructor in metallurgy, advancing to Associate Professor of Metallurgy in 1948. He also served as a consultant during World War II for not only the Haseltine Service Corporation, but for the United States government’s Chemical Warfare Service, Statistics Research Group, and the Heat Transfer Laboratory, the latter two based at Columbia University.

Subsequently, Mr. Melvin took two years off to conduct his own pioneering researches on the application of a theory of generalized symmetry to electrodynamics and quantum theory, work supported in part by the first of his Guggenheim Fellowships. He received a second Guggenheim Fellowship in 1956 to further these studies; he spent that Fellowship term at the University of Uppsala, Sweden, working with Per-Olov Löwdin in his Quantum Chemistry Research Group.

In 1952, Mr. Melvin joined the faculty of Florida State University, beginning his fourteen-year tenure there as a Professor of Physics. It was during this time that he worked with Löwdin and as a Visiting Professor in the International Atomic Energy Agency Program at the Institute of Physics in Bariloche, Argentina, from 1959 to 1960. He also served as chairman of the Physical Science Section of the Florida Academy of Sciences in 1954, and was elected a Fellow of the American Physical Society in 1964.

Mr. Melvin accepted an appointment as Professor of Physics at Temple University in 1966. While there, he organized in 1967 the first symposium on relativistic astrophysics and elementary particles. In addition to his teaching duties, he published many articles in such important journals as Physical Review, Nature, American Journal of Physics, Journal of Chemistry and Physics, and Journal of Applied Physics, among numerous others. He also held a Fulbright Fellowship in India (1982), and was a visiting professor or visiting scientist at Princeton University, the Tata Institute in India and other Indian universities (1982, 1983), and universities in Kyushu, Kyoto, and Tokyo, Japan. With the support of the National Research Council and the National Academy of Sciences, he also was a Senior Research Associate in 1971-72 at the Jet Propulsion Laboratory operated by Caltech.

His research dealt with many aspects of physics, including an algebraic method for determining the arrangement of atoms in crystals directly from x-ray data; elementary particles and fields; symmetry methods in physics; and quantum cosmology. After retiring from Temple University as Professor Emeritus of Physics, Mr. Melvin remained an active researcher and continued to publish his findings. Among these later articles are (with David F. Cattell), “Neutrino, Maxwell and Scalar Fields in the Cylindrical magnetic or plasm universe,” Journal of Mathematical Physics, 20 (1979); (with R. Cowsik and P. Ghosh), “Oblateness effects on the spindown of fast pulsars,” Nature, 303 (1983); and “Exterior Solutions for electric and magnetic stars in 2 + 1 dimensions,” Classical and Quantum Gravity, 3 (1986).