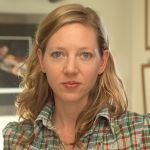 Maggie Nelson is most recently the author of four books of nonfiction: a meditation on the color blue titled Bluets (Wave Books, 2009); a critical study of poetry and painting titled Women, the New York School, and Other True Abstractions (University of Iowa Press, 2007; winner of the Susanne M. Glasscock Award for Interdisciplinary Scholarship, and a Creative Capital/Andy Warhol Foundation Arts Writers Grant); an autobiographical book about family, sexual violence, and media spectacle titled The Red Parts: A Memoir (Free Press, 2007; named a Notable Book of the Year by the State of Michigan); and a work of cultural and art criticism titled The Art of Cruelty: A Reckoning (W. W. Norton, 2011). She also contributes to publications such as Artforum, Bookforum, Cabinet, and others.

Nelson is also the author of several books of poetry, including Jane: A Murder (Soft Skull Press, 2005; finalist, the PEN/Martha Albrand Award for the Art of Memoir), Something Bright, Then Holes (Soft Skull Press, 2005), The Latest Winter (Hanging Loose Press, 2003), and Shiner (Hanging Loose, 2001; finalist, the Poetry Society of America’s Norma Farber First Book Award). Her poetry has been widely anthologized, and has been included in The Best American Poetry series.

Nelson holds a Ph.D. in Literature from the Graduate Center of the City University of New York. She has taught literature and writing at Wesleyan University, Pratt Institute of Art, and the New School Graduate Writing Program. In 2005, Nelson joined the full-time faculty of the School of Critical Studies at CalArts in Valencia, California, where she currently teaches in the B.F.A. art curriculum and the M.F.A. Writing Program. She lives with her partner, artist Harry Dodge, in Los Angeles.