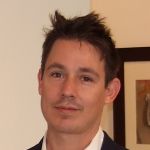 American painter Marc Trujillo depicts in his paintings places that are omnipresent in American urban and suburban landscapes such as gas stations, shopping malls, big chain stores, and restaurants.

Mr. Trujillo’s paintings are fundamentally synthetic in nature, and represent not only the experience of direct observation, but also an appreciation for and awareness of paintings and painters of the past. The finished work is the sum total of a series of steps that begin with drawing and preparatory sketches. Before beginning the final oil painting, Mr. Trujillo completes a grisaille, a monochromatic underpainting that allows him to establish the initial composition of each work.

Born in Albuquerque, New Mexico, in 1966, and currently residing in Los Angeles, Mr. Trujillo teaches at Santa Monica College. He received his B.A. in 1991 from the University of Texas at Austin and his M.F.A. in 1994 from the Yale University School of Art, where he received the Ely Harwood Schless Memorial Fund Prize as well as the Ellen Battell Stoeckel Trust Fellowship. In 2001, Mr. Trujillo received the Louis Comfort Tiffany Foundation Award, and in 2008 he received the Rosenthal Family Foundation Award in Art from the American Academy of Arts and Letters.

Mr. Trujillo's work has been exhibited nationally on both coasts and featured in numerous publications, including Artforum, ARTnews, the Los Angeles Times, and Artweek.

Mr. Trujillo recently completed 5711 Sepulveda Boulevard, which will ship to Hirschl & Adler Modern the last week of October. Follow this link to read Mr. Trujillo's online account of the stages of his work concerning this painting.