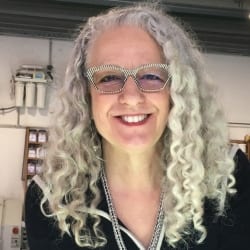 Reflect- Reflection on Synchronicity of Color

Margo Sawyer’s artistic practice investigates the relationship between space and transcendence; the places where architecture and ritual converge to create transcendent qualities that encourage a state of contemplation within the viewer. The central actor in her work is color. Sawyer’s practice bridges site-specific installations and public art to transform mundane architectural structures into euphoric icons, join exquisite objects and materials into domestic spaces, and turn large public spaces into intimate refuges. Sawyer’s art unites the complex and unexpected, where the physical, material, perceptual, and psychological effects of color interact.

Sawyer’s most celebrated works are Synchronicity of Color, Red & Blue (2008) at Discovery Green in Houston, Texas. These works transform two utilitarian structures into jubilant quilts of color, where the scale and physicality of colors draw you in. Synchronicity of Color, Red & Blue was honored in Public Art in Review (2009) by America for the Arts & Public Art Network, for exemplary commitment and leadership in the field of public art, and the works soon became an icon for the city of Houston. Sawyer’s art unites color in a way that celebrates and honors our multicultural/multidimensional world. Sawyer continues to research what makes a place sublime, and focuses on creating immersive structures that foster an awareness of the contemplative self.

Sawyer received her M.F.A from Yale University and a B.A. Honors Degree from Chelsea School of Art / London, UK. She is a Professor of Sculpture & Extended Media in the Department of Art & Art History at the University of Texas at Austin, and is represented by Holly Johnson Gallery in Dallas, TX.