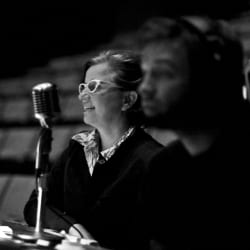 Marianne Weems is artistic director and co-founder of the award winning New York-based performance ensemble The Builders Association. With the company she has created 17 original large-scale productions at the forefront of crossmedia performance – The New York Times has said, “The Builders Association makes other multimedia theater look as if it’s from the Stone Age.” Her work with the company has toured worldwide to over 80 theaters, festivals, and museums, and in New York has been presented at Lincoln Center, The Kitchen, New York Theater Workshop, St. Ann’s Warehouse, the Guggenheim Museum, the Whitney Museum, and four productions have premièred at The Brooklyn Academy of Music.

Weems has also worked in various creative roles with Taryn Simon, Susan Sontag, The V-Girls, David Byrne, the Wooster Group, and many others.

Weems led the Graduate Directing program at Carnegie Mellon University’s School of Drama from 2008-14 and is currently Special Faculty at Carnegie Mellon’s Integrative Media Program. She has served on the board of the small but fierce foundation Art Matters since the early ‘90’s and participated in the formation of Visual AIDS, and the National Campaign for Freedom of Expression. She is the co-editor of Art Matters: How The Culture Wars Changed America (NYU Press 2005) and co-author with Professor Shannon Jackson of The Builders Association: Performance and Media in Contemporary Theater (MIT Press 2015.)

While a Guggenheim Fellow, Weems will be working on a performance to premiere at The Brooklyn Academy of Music’s Next Wave Festival in 2018.