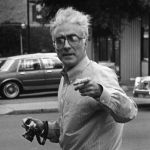 Perhaps best known for his innovative street photography and flash technique, Mark Cohen began taking pictures as a young teen and had some success while still in high school with the Eastman Kodak photo contests. He entered Penn State University in 1961 as an engineering major but his skill as a photographer earned him a solo exhibition there in 1962. At the same time he began classes in art history.

Returning to Wilkes-Barre, he opened a commercial photography studio and also worked as a photography instructor at Wilkes College and King’s College, as he continued to pursue his own artistic vision. In 1969 he participated in the group exhibition Vision and Expression at the George Eastman House. The following year the Museum of Modern Art in New York City purchased

some of his work, including it in the Recent Acquisitions exhibition, which brought him to national attention. In 1971, while still in his twenties, he was awarded his first of two Guggenheim Fellowships, which further bolstered his career. He used his year-long term in search of photographic subjects.

In 1973 MoMA presented a solo exhibition of his work, and shows at the George Eastman House, the Light Gallery in New York City, and the Art Institute of Chicago followed over the next two years. Throughout the 1970s he participated in group shows at the Whitney Museum of American Artin New York, Tyler School of Art in Philadelphia, the University of New Mexico Art Museum in Albuquerque, as well as in London, Paris, and Milan. During that decade he also won his second Guggenheim Fellowship and an NEA grant.

He has been a visiting professor or lecturer at Princeton University, MIT, the Rhode Island School of Design, the Cooper Union, the International Center of Photography in New York, and Parsons School of Design, to name just a few institutions to which he is invited.

Monographs of his work include Grim Street (2005); True Color (2007), with text by Vince Aletti; and most recently, Wonders Seen in Forsaken Places: An Essay on the Photographs and the Process of Photography of Mark Cohen (2010), by Alphonso Lingis.

Writing in the Village Voice about Grim Street, critic Vince Aletti characterized Cohen’s black and white images as "deliberately disconcerting, almost vulgar. . . . Heads are cropped out of the frame; truncated hands, legs and arms loom monstrously into view; perspective warps. Cohen wasn’t alone in his harsh comic view of down-home America, but his in-your-face take and fragmentary results were jarringly unique, and much imitated."

Examples of Mark Cohen’s work are in the permanent collections of the Art Institute of Chicago, MoMA, the Corcoran Gallery of Art in Washington, D.C., the Metropolitan Museum of Art, the Musee de la Photographie in Belgium, the Museum of Fine Arts in Houston, the National Gallery of Victoria, Melbourne, Australia, and the Fogg Art Museum and the Polaroid Collection, both in Cambridge, Massachusetts, among many other institutions.

Follow these links for more information about Mark Cohen’s work:

Profiles in Excellence: Mark Cohen, on the wpsu.org website