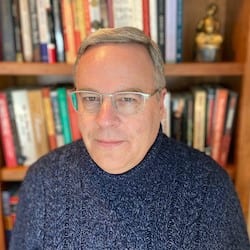 Mark Philip Bradley is Bernadotte E. Schmidt Distinguished Service Professor of History and the College at the University of Chicago.  He is an international historian of empire and the postcolonial in Asia and the United States.  At the center of his work is a set of questions about how states and peoples make sense of the world around them in moments of transformative historical change.  Bradley's current research explores the cultural politics of the global South and its central presence in the making of our times.  He is the author of The World Reimagined: Americans and Human Rights in the Twentieth Century (2016), Vietnam at War (2009) and Imagining Vietnam and America: The Making of Postcolonial Vietnam (2000), which won the Harry J. Benda Prize from the Association for Asian Studies.  He is general editor of the four volume Cambridge History of America and the World (2021) and the coeditor of Familiar Made Strange (2015), Making Sense of the Vietnam Wars (2008), and Truth Claims (2001).  Bradley received his Ph.D. in History from Harvard University.  At Chicago he also serves as the Faculty Director of the Pozen Family Center for Human Rights and Deputy Dean of the Social Sciences Division. Photo Credit: Ilsa Bradley