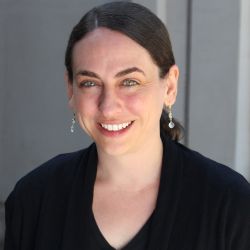 Marla Geha is a professor and astrophysicist at Yale University. She obtained a B.S. in Applied and Engineering Physics from Cornell University in 1995 and her PhD in Astronomy and Astrophysics from University of California Santa Cruz in 2003. She was awarded a Hubble Postdoctoral Fellowship by the Space Telescope Science Institute, which she took to the Carnegie Observatories. She arrived at Yale in 2008 as an Assistant Professor, and was promoted to the rank of full Professor in 2014.

Geha utilizes the world's largest telescopes to study the smallest galaxies in the Universe. Her research is focused on understanding how the least luminous known galaxies formed, and using these galaxies to understand the nature of dark matter and the underlying cosmology of the Universe.

Throughout her career, Geha has been involved in promoting the public understanding of science through observatory open days, public lectures and school visits. Geha is currently leading a team to develop a science curriculum for the Warrior-Scholar Project, a two-week summer boot camp for returning United States military veterans. Geha has received various honors including Popular Science magazine's ``Brilliant 10" young scientists in the country (2009) and an Alfred P. Sloan Research Fellow (2010). Between 2012-2014, she was a Kavli Frontiers of Science Fellow, participating and organizing sessions for the yearly U.S. Kavli Frontiers of Science meeting hosted by the National Academy of Science. Geha's science has been featured in popular articles published including Time Magazine, CNN, The Daily Mail and the John F. Kennedy Legacy Gallery.