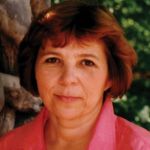 Marta Ptaszynska, composer, percussionist, and professor of composition,  born in Warsaw, Poland, has been living in the United States since 1972. She is the author of such well-known works as the Concerto for Marimba, Winter’s Tale, Sonnets to Orpheus, and Moon Flowers, as well as numerous composition for percussion (Siderals, Graffito, Spider Walk, Space Model, Letter to the Sun) which have been performed often around the world. Ptaszynska has received commissions from orchestras including Chicago Symphony Orchestra, Cincinnati Symphony, Polish Chamber Orchestra, W. Lutoslawski’s Symphony Orchestra and Sinfonia Varsovia, from artists such as contralto Ewa Podles, marimba virtuoso Keiko Abe, and percussionist Evelyn Glennie. Her television opera Oscar of Alva, produced by Cracow Television, received both audience and critical acclaim at the International Festival of Television Operas in Salzburg in 1989. Her opera for children, Mister Marimba, which was in the repertory of the National Opera in Warsaw from 1998 until 2006, has enjoyed phenomenal success and popularity for seven consecutive seasons with 114 performances. Her opera Magic Doremik was premiered at the National Opera in Warsaw in 2008 and performed during the seasons 2007-08 and 2008-09.

Her Holocaust Memorial Cantata gained international recognition when performed several times in 1993 under the baton of Lord Yehudi Menuhin.

Marta Ptaszynska has been honored with many prizes and awards, including the 2006 Benjamin H. Danks Award of the American Academy of Arts and Letters, The Fromm Music Foundation, Alfred Jurzykowski Award in New York, multiple ASCAP Awards, the Award at the International Rostrum of Composers at the UNESCO in Paris, awards from the Percussive Arts Society and from the Union of Polish Composers. In 1995, she received the “Officer Cross of Merit” of the Republic of Poland.

Her music has been performed at prestigious international festivals, including ISCM World Music Days, the Huddersfield Contemporary Music Festival, the Salzburg Festival, the Warsaw Autumn International Festival, the Schleswig-Holstein Music Festival, the Gulbenkian Foundation New Music Festival, the Prix Futura in Berlin, and many others.
In her native Poland Ptaszynska studied composition at the Academies of Music, both in Warsaw and in Poznan. Also, she worked privately with Witold Lutoslawski, who later became her mentor. As a French Government's grant recipient, she studied in the early seventies with Nadia Boulanger and attended Olivier Messiaen’s analysis classes at the Paris Conservatory, and the Centre Bourdan de L’ORTF. In 1974, she received an Artist Diploma Degree in Percussion Performance at the Cleveland Institute of Music in Cleveland, where she worked with Cloyd Duff, Richard Weiner, and Donald Erb. Widely acclaimed as a virtuoso percussionist, for several decades she has performed extensively as a soloist percussionist, and has participated in many European and American festivals.

Her distinguished career as a composition teacher includes professorships at Bennington College in Vermont, the University of California in Berkeley and in Santa Barbara, the Cincinnati College-Conservatory of Music, Indiana University in Bloomington, and Northwestern University in Evanston. In 1998 Ptaszynska was appointed a Professor of Music and in the Humanities at the University of Chicago. Since 2005 she holds an endowed chair and is Helen & Frank Sulzberger Professor of Composition.

Her music is published by PWM (Polish Music Publications) in Poland and by Theodore Presser in the U.S. Her music is recorded on CD Accord-Universal, Muza Polish Records, Chandos, Olympia, Dux, Bayers Records, and Pro Viva Sonoton labels.

Ptaszynska’s commissions include the work Fanfare Peace for the Cincinnati Symphony Orchestra centennial; the operas for children Mister Marimba and Magic Doremik for the National Opera in Warsaw, Poland; and the new opera on Chopin Winter in Majorca for the Grand Opera in Lodz, Poland; the orchestral work Inverted Mountain for the Chicago Symphony Orchestra; Winter's Tale for the Polish Chamber Orchestra; Moon Flowers for BBC in England;  a percussion work entitled Linear Constructions in Space for Sudwestdeutsche Rundfunk in Baden-Baden in Germany; Drum of Orfeo—Concerto for Percussion for Evelyn Glennie; Mosaics for Pacifica String Quartet; Four Portraits for the Wilanov String Quartet; the arrangement of Lutoslawski's Paganini Variations for Safri Duo; Silver Echoes for the Kosciuszko Foundation's 75th Anniversary; Scherzo di Fantasia for the International Women's Brass Conference; Sinfonia Wratislavia for the 50th anniversary of the W. Lutoslawski’ Symphony Orchestra, and many others.

As a percussionist she has been performing extensively as a soloist and a chamber player, and has participated in many European and American festivals. Many compositions for percussion were written and dedicated to her. In 1986 she co-founded the International Percussion Workshops in Bydgoszcz, Poland.

In 1965-70 Ptaszynska was a president of the Circle of Young Composers of the Union of Polish Composers in Poland. Also, in the years 1981-84 she served as a member of the Board of Directors of the Percussive Arts Society (PAS) in the U.S. In 1991 she co-founded and for several years was vice president of the American Society of Polish Music in New York. Currently she is a member of ASCAP, the Percussive Arts Society, and the Polish Music Reference Center in Los Angeles, and serves on the board of the International Alliance of Women Composers.

As an artistic adviser, she arranged the music program of two Polish music festivals which took place at the New York Public Library for the Performing Arts at Lincoln Center in New York in 1994 and 1996.

Her music is published by PWM (Polish Music Publications) in Poland and by Theodore Presser in the U.S. Her works are recorded on Muza Polish Records, Olympia, Chandos, ProViva, Bayers Records, DUX, and Polygram-CD Accord labels.

In 2002 Polish Music Publications in Cracow released a book about her music entitled Music, the Most Perfect Language: Conversations with Marta Ptaszynska.