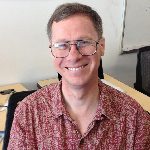 Martin White is a Professor of Physics and Astronomy at the University of California Berkeley, and a staff scientist at Lawrence Berkeley Lab. White received his Bachelor of Science (1988) from the University of Adelaide, Australia, in mathematical physics. He attended an honors program (particle physics theory) in Tasmania for 9 months (1989), and then obtained a PhD from Yale (1992) in particle astrophysics. He has received numerous honors including an Alfred P. Sloan Fellowship and an Enrico Fermi Fellowship, and is a Fellow of the American Physical Society and of the American Association for the
Advancement of Science.

White’s work on physical cosmology spans a wide range of topics within the discipline, using analytical and numerical methods to characterize theory, model and analyze data, and confront the two. He work includes theory, analysis and modeling of the cosmic
microwave background (CMB), starting in the early 1990’s; he is currently a member of the Planck satellite core team. He has contributed many theoretical calculations (numerical and analytical) in the development of weak gravitational lensing. In addition, he has worked on galaxy clusters in many capacities: their detection, characterization and exploitation, analytically, in simulations and in observational data, using a wide range of wavelengths. He has also combined these results and others to understand properties of
the universe (its matter and dark energy content, etc.) as a whole (parameter estimation). More recently he has been working on large scale structure (including the theory of baryon oscillations), the Lyman alpha forest, and galaxy formation.

These last three areas are the focus of White’s Guggenheim work on the Baryon Oscillation Spectroscopic Survey (BOSS). BOSS is part of the third generation of the Sloan Digital Sky Survey and is producing a spectacular data set: a three dimensional map of the universe via 1.5 million luminous galaxies and the absorption of intergalactic Hydrogen along the line of sight to 150,000 quasars. This map gives access to a wealth of information about the evolution of structures (galaxies, quasars, etc.) in the universe, as well as information about the universe itself (in particular dark energy, via the eponymic baryon oscillations). White served as survey scientist from first proposal to first light and is currently survey science chair. As a Guggenheim Fellow, he is analyzing and interpreting these amazing data to constrain the expansion rate of the universe, test general relativity, and better understand the evolution of massive galaxies and quasars.