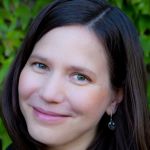 Born in Williamsport, Pennsylvania in 1970, Mary Szybist is the author of two books of poems, most recently Incarnadine (Graywolf Press, 2013), winner of the 2013 National Book Award in Poetry. Incarnadine was also named a best book of the year by Slate, NPR.org, Amazon.com, and Publishers Weekly, and it received the 2014 Oregon Book Award for Poetry.  Szybist’s first book, Granted (Alice James Books, 2003), was a finalist for the National Book Critics Circle Award and won the 2004 Great Lakes Colleges Association New Writers Award. Szybist is the recipient of residencies from the MacDowell Colony and the Rockefeller Foundation's Bellagio Center, a Pushcart prize, and fellowships from the National Endowment for the Arts,  Rona Jaffe Foundation, and Witter Bynner Foundation in conjunction with the Library of Congress.  She is an Associate Professor of English at Lewis & Clark College in Portland, Oregon.   Profile photograph by Joni Kabana