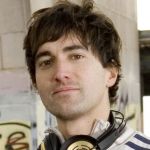 He has not only been an Instructor in Harmony at the University of California, Berkeley, but frequently works as a DJ in the San Francisco area.  His compositions range from theatrical works, such as California Fictions, an opera in one act, to the symphony Rust Air in Carolina, to chamber works for mixed ensemble and electronic, such as Red River.  His equally varied venues include Carnegie Hall, the San Francisco Museum of Contemporary Art, and such famed clubs as Mezzanine in San Francisco, Roter Salon in Berlin, and Rome's Scarabocchio Metaverso in Testaccio.

He has received numerous prestigious commissions, from the National Symphony, the Koussevitsky Foundation, and the New Juilliard Ensemble, among others. Although his recent compositions employ the interplay of acoustic and electronic sounds, his love of music has its roots in his experiences as a member of the all-boys' choir and glee club at St. Christopher's School in Virginia.  During his Guggenheim Fellowship term, he melded these interests in his latest composition, Fishermen of Souls, a work for chorus and orchestra, that uses Matthew 4:19 as its inspiration.