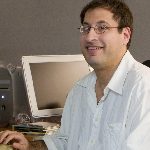 Matthew G. Kirschenbaum is Associate Professor in the Department of English at the University of Maryland and Associate Director of the Maryland Institute for Technology in the Humanities (MITH, an applied thinktank for the digital humanities). He is also an affiliated faculty member with the Human-Computer Interaction Lab at Maryland, and a member of the teaching faculty at the University of Virginia’s Rare Book School. His first book, Mechanisms: New Media and the Forensic Imagination, was published by the MIT Press in 2008 and won the 2009 Richard J. Finneran Award from the Society for Textual Scholarship (STS), the 2009 George A. and Jean S. DeLong Prize from the Society for the History of Authorship, Reading, and Publishing (SHARP), and the 16th annual Prize for a First Book from the Modern Language Association (MLA). In 2010 he co-authored (with Richard Ovenden and Gabriela Redwine) Digital Forensics and Born-Digital Content in Cultural Heritage Collections, a report published by the Council on Library and Information Resources and recognized with a commendation from the Society of American Archivists. Kirschenbaum speaks and writes often on topics in the digital humanities and new media; his work has received coverage in the Atlantic, New York Times, National Public Radio, Wired, Boing Boing, Slashdot, and the Chronicle of Higher Education. His current book project is entitled Track Changes: A Literary History of Word Processing, and is under contract to Harvard University Press. Follow him on Twitter: @mkirschenbaum.