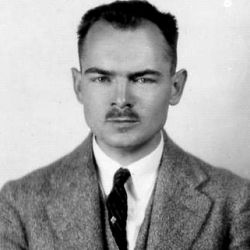 Hughes, Merrit Yerkes: Appointed for research in the literary relations of England and Italy in the latter part of the sixteenth and in the seventeenth centuries, principally at the University of Rome, Italy; tenure, twelve months from August 15, 1925.

Publications: Articles notably in Studies in Philology, Modern Language Review, New Republic and Literary Review of the New York Times. His “Study of Dante in France since 1870” divided the annual prize of the Dante Society of America, 1922.