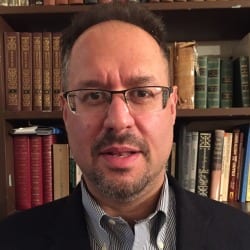 Michael David-Fox is a historian of modern Russia and the USSR, whose work has ranged from cultural and political history to transnational studies and modernity theory. At the outset of his career, he became one of the first foreign researchers to work in formerly closed Communist Party archives during the collapse of the Soviet Union. He went on to become a founding editor of Kritika: Explorations in Russian and Eurasian History, a transformative journal that has helped to internationalize the field of Russian Studies. In a series of books, nine edited volumes, twelve edited special theme issues of journals, and over forty-five articles and chapters, David-Fox has probed unexpected connections between culture and politics, institutions and mentalities, and domestic and international shifts. His latest work explores covert entanglements across borders, ideologies, and cultures.

A Professor in the School of Foreign Service and Department of History at Georgetown, David-Fox received his A.B. from Princeton and his PhD from Yale. He is author of Revolution of the Mind: Higher Learning among the Bolsheviks, 1918-1929 (1997); Showcasing the Great Experiment: Cultural Diplomacy and Western Visitors to the Soviet Union, 1921-1941 (2012, translated into Russian and Chinese, a Choice Outstanding Academic Title); Crossing Borders: Modernity, Ideology, and Culture in Russia and the Soviet Union (2015, under translation into Russian, winner of the 2016 Historia Nova Prize for Best Book in Russian Intellectual and Cultural History).

David-Fox has been a Humboldt Fellow in Berlin, a visiting professor at the École des Hautes Études en Sciences Sociales in Paris, and was awarded the title of honorary professor from Samara State University in Russia. He has been a visiting scholar at or held fellowships from the W. Averill Harriman Institute at Columbia University, the Swedish Collegium for Advanced Study, the Kennan Institute for Advanced Russian Studies, the Davis Center for Historical Studies at Princeton University, the Mandel Center for Advanced Holocaust Studies at the United States Holocaust Memorial Museum, the Woodrow Wilson International Center for Scholars, and the American Council of Learned Societies.

His Guggenheim Project, “Smolensk under Nazi and Soviet Rule,” is a study of the exercise of power in a Russian region under Stalinism and the German occupation during WWII. Aiming squarely at the place where regional history meets the grand narrative, it cross-fertilizes three rapidly evolving fields: the study of Stalinism, German occupation on the Eastern Front during World War II, and the Holocaust.