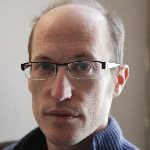 For the past twenty years, Michael Galinsky has been making films with Suki Hawley.  After making two narrative features (Half-Cocked in 1994 and Radiation in 1999), they began work on the documentary Horns and Halos (2002), which they completed in partnership with David Beilinson.  Since then, they formed the collaborative production studio Rumur.  In 2011, they completed and distributed their fifth feature (third with Beilinson), Battle for Brooklyn.  It played in over twenty cities and was recently named one of the fifteen notable films of 2012 by the American Library Association.  They are currently working on several documentary and narrative film projects, including Conception, which explores the nature (and nurture) of family, and will use the Guggenheim Foundation grant to focus on that film.  In addition they are in the middle of production on Story of Pain, a film about the pain epidemic and the pioneering work of Dr. John E. Sarno.