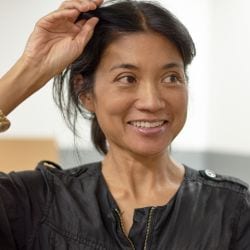 Michelle Lopez is an interdisciplinary sculptor and installation artist, known for her rigorous conceptual practice and boldly experimental approach to process and material. Her research of industrial materials exposes the boundaries of our own cultural constructions. Early work such as her leather-covered car, Boy, riffs on of our relationship to consumer products by combining forms of Capitalism with skin-colored leather. Lopez also examines art-historical Minimalist forms, by building abject spare structures out of debris. Her crumpled aluminum and stainless-steel work, Blue Angels, exemplifies a post-9/11 technological failure while also considering the performative element of the artist’s body via sculpture. Her sound and kinetic installation, Halyard, is a further iteration of examining invisible structures of power.

Lopez has mounted ambitious international exhibitions that experientially examine collapsed structures on micro (individual and figurative) and macro (political and social) levels. She looks at the phenomenon of violence through structures of silence and disappearance. Her series of silver-nitrate pours onto large-scale, UV-treated, architectural glass, Smoke Clouds capture the wisp of smoke after destruction as an elegiac sculptural form, and as a mirror to reflect the viewer’s image. Her most recent installation of an abject collapsing scaffolding system has steel rope and street rubble lifting it all up in a strange contradictory logic.

As an artist, I’m invested in the history of sculpture and what it means to make objects and figures now in uncertain times. My Blue Angels (crushed, folded powder-coated aluminum and stainless-steel sculptures) came in response to witnessing on Broadway the crumbling of the World Trade Center towers on 9/11 in NY. It was the first moment I realized my work needed to reflect this cultural instability and violence. I imagined the ‘Blue Angels’ to be a hybrid of airplane wings, wilted petals, and broken bird feathers.

As a female artist, I’m also interested in taking not only masculine but monolithic Minimalist material and form, and rendering it vulnerable. The same goes for my ‘Flags’ as I tried to expose nationalism, patriotism and power within a flag-waving culture and render it rather as an SOS flag. The industrial lead sheets wrapped around these structures become fragile and organic.

Within these icons, I seek out perverse contradictions and loopholes within our shared cultural icons as they signify “–isms:” consumerism, nationalism, patriotism, terrorism, Minimalism, machismo. I tamper with this culture of familiarity to expose oxymorons of society and self, through acts of physical violence and allegorical inversions, in order to undo and critique the chosen iconography. I move in reverse and find the human frailty inherent in these forms and then punch the piece to wilt through the choice of materials and manipulation of form.

These emblems of culture translate into how we present ourselves bodily: appropriated, hybrid, hung, or vulnerable, even tragically monumental. My suspended ropes cast in crystal are both lithe chandeliers, and limp, lone, invisible figures. A gilded ‘Throne’ (made specifically after the recent US presidential election of 2016) rises anemically in Giacometti-style. The gold moments reveal a two-faced attempt to gild the moment and make it grander than its industrial and grim reality.

My work most recently has been a tenuous balance of an abject scaffolding system (‘House of Cards’ Installation [Simon Preston Gallery]), delicately drawn with unlikely rigid material: steel rope and tendrilled lead vines, all of which I fabricate myself in the spirit of drawing. These Arte Povera structures lean on each other on the verge of collapse. Yet there are contradictions in the structure: the rope is the thing that rises above and supports the scaffolding, steel rubble suspends some of the work as a form of resistance and even of impossible hope, choreographed with a means to balance. I pull hot glass to continue the line of drawing and coat it with mirrored silver nitrate so that the points and space between each material, including the air between, vibrates. The glass becomes another lone, suspended figure.

Ultimately, I have been exploring our post 9/11 experience and its abject residue on the object. I am seeking to redeem sculptural language by examining its shortcomings, and then distilling towards regeneration. I want a vibrancy of form, so that sculpture can claim a new discourse that is none of these -isms, everything and not, and then begins again.