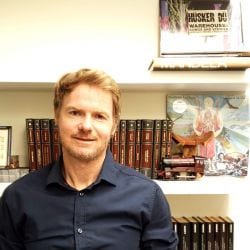 How does the brain rapidly process the visual world around us through complex computations and give rise to humans’ incredible proficiency at finding objects, identifying faces, or diagnosing cancer from x-ray images? These perceptual tasks can be effortless and automatic for humans, giving the impression of simplicity. However, this intuition is misleading. Our vision is the result of over 500 million years of evolution. Over ¼ of the neural machinery of the human brain is dedicated to vision. Machines surpass humans in chess, the game of Go, and Jeopardy, but still, for now, do not match human capabilities in complex perceptual tasks. And therein lies the beauty of perception research for Dr. Eckstein: uncovering the secrets of how the brain sees, with every tool he can get hold of, including mathematics, behavioral psychophysics, eye tracking, brain imaging, computer science, and observational work. Most of the time, this journey has had Dr. Eckstein thinking and gathering data at the lab at the University of California Santa Barbara. It has taken him routinely to clinics to talk to radiologists. It has also occasionally taken him across the world to study phenomena such as how fishermen can discriminate fifteen species of fish on the ocean surface from a large distance, or how honey bees can manifest human-like visual attention when finding food.

Born and raised in Argentina, Miguel Eckstein graduated from the Colegio Nacional Buenos Aires high school and came to United States to study at the University of California, Berkeley. Somehow, on that first day in California, he would manage to get his bag stolen with all of his belongings in the shuttle trip from the airport to Berkeley. Fortunately, the path ahead would be a little brighter. He obtained undergraduate degrees in Physics and Psychology at UC Berkeley and a PhD in Cognitive Psychology at UCLA. He then worked at NASA Ames Research Center and the Department of Medical Physics & Imaging, Cedars Sinai Medical Center, Los Angeles before joining UC Santa Barbara as a faculty member of the Department of Psychological and Brain Sciences. His work has been recognized by various awards, including the Cedars Sinai Young Investigator Award, the Optical Society Young Investigator Award, the National Science Foundation CAREER Award, and the National Academy of Science Troland Award.

He has served as the Vision Editor of the Journal of the Optical Society of America, the Board of Directors of the Vision Sciences Society, Board of Editors of Journal of Vision, Chair of the Human Performance, Image Perception and Technology Assessment Conference of the SPIE Medical Imaging Annual Meeting, and over thirty times on grant reviewing panels for the National Institute of Health. At UC Santa Barbara, he is currently on the Advisory Committee of the Neuroscience Research Institute and the Sage Center for the Study of the Mind, and serves as Chair of the Dynamical Neuroscience Graduate Program.

He is deeply committed to the University of California’s mission of providing access to education and opportunities to those from low-income, under-represented minorities and first-generation students. He serves on the Advisory Committee of the ONDAS Center (Opening New Doors To Accelerating Success), which promotes the success and retention of first-generation college students. Five years ago, he started a Faculty Mentorship Program dedicated to support, advise, and inspire UCSB Dreamers to help them carve a bright future.

As a Guggenheim fellow, he plans to study children recovering from congenital blindness after surgery to understand how eye movement behavior during childhood development shapes brain mechanisms mediating face recognition.