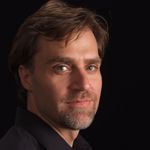 The music of Mikel Kuehn has been described as having “sensuous phrases … produc[ing] an effect of high abstraction turning into decadence” by author and New York Times critic Paul Griffiths. Trained as a percussionist in the Los Angeles area in the early 1980s, Kuehn split his time equally between jazz, classical, and electroacoustic music, eventually becoming a composer as a way to fuse their unique elements into a personal musical language. His music regularly explores the boundaries of harmony and color woven into dramatic narratives.

Currently Professor of Composition at Bowling Green State University, Kuehn was director of the MidAmerican Center for Contemporary Music (MACCM), the annual New Music Festival, and the Music at the Forefront concert series from 2007 through 2010. He holds degrees from the Eastman School of Music and the University of North Texas.